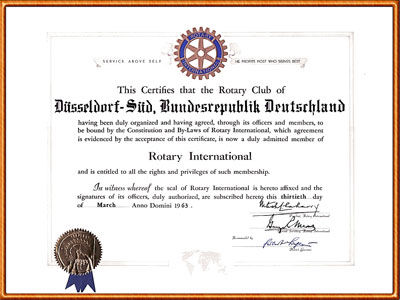 The Rotary Club Düsseldorf-Süd was established on Dec-19 1962 with the help of RC Düsseldorf. It received its charter, the official acceptance to the Rotarian community, on Mar-30 1963. The Düsseldorf-Süd club is part of the Rotarian family in the city of Düsseldorf, which includes these additional clubs:

Based on the core values which guide our city Düsseldorf, capital of the German State of Northrhine-Westfalia, namely sustainability, global partnership and community, we follow these guiding principles:
Connected to the past  -  Shaping the present  -  Committed to the future. 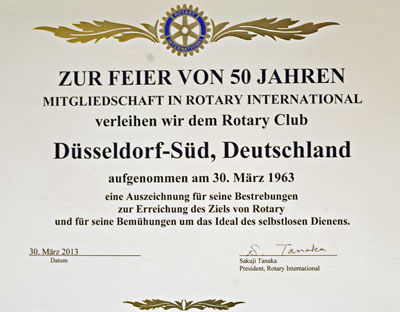 Being connected to the past means that “the past is vitally important when shaping future concepts today, the present. And the present is vitally important to a productive access of the past.” (Jörn Rüsen, historian and cultural scientist)
Actively shaping the present as a Rotarian means to act according to the Rotarian ideal of “Service above self”.
The Rotarian ideal is based on the ethical principle that in serving, one benefits the most. This ethic ideal is firmly imbedded into our value structure of freedom, justice, truth, contract loyalty and respect for human rights.
Committed to the future, on one hand, means weighing whether future consequences of actions are in harmony with rotarian basic principles.
On the other hand, being committed to the future requires positive sustainability be the measure to guide decisions and their consequences.
Positive sustainability, as a measure, is one of the important criteria when we select the humanitarian, social and cultural projects our club and its members work on. 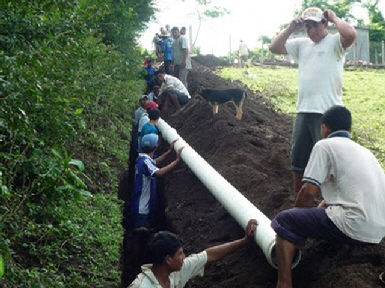 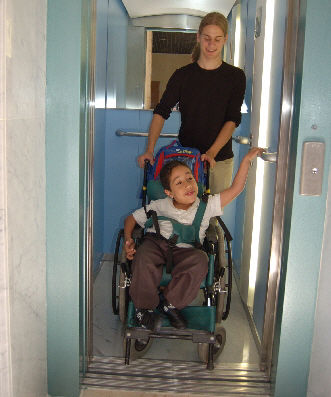 Our projects focus on:
A.  Humanitarian Concerns
B.  Advancement of Education
As a rule we invite other Rotary clubs to work on our projects with us, so that we may achieve a higher degree of impact. For this reason, we also help other clubs and cooperate in their projects.
At the forefront are projects which advance the motivation for individual initiative and promise sustainable effects.
A. Humanitarian Concerns
On a global level we have been supporting Rotary’s long term campaign “PolioPlus”, directed at eradicating polio through a worldwide inoculation program.
Current examples for projects with a local perspective include the following:
Conceived as a joint project, all rotary clubs from Düsseldorf jointly support the early coaching and care of young children at the Karl-Tietenberg-School.  Also, all clubs have joined in to financially support the newly launched music child care center which for the most part  teaches children with a wide spectrum of nationalities. The music approach significantly increase lingual and expressive competence and thereby creates ideal preconditions for infant learning.
We have participated for a number of years now in the long-term project „Establishment of an Eye Clinic and the Requisite Physicians‘ Training, Niamey, Niger“.  The on-site project management is being handled by our partner club of Antwerpen-Park.  Rotarian Dr. Haustrate, a member of the Antwerpen Club)  regularly visits Niamey for several weeks on time during a given year and moves the project diligently forward.
For many years now we have supported the Talitha Kumi insitution in West-Jordan.  Talitha Kumi is part of the UNESCO School System and pursues an integrative concept in more ways than one.  Firstly, Talitha Kumi with its Christian value foundation in a predominantly Muslim area  is open to all confessions.  Secondly, we see a growing connection between scholastic education and professional training in the form of an academy for hotel management. Thirdly, we are working on the integration for handicapped student.
We have also participated in two humanitarian projects of the Jerusalem Rotary Club:  the purchase of a transport vehicle for handicapped persons and of a mobile treatment unit for patients (especially small children) suffering from cystic fibrosis.
We expedited the installation of a complete drinking water system for the citizens of Santa Clara, El Salvador, by securing the final financial package.  A financial shortfall had developed as the project had run for a number of years.
We supported the re-construction of the school Fuji, Japan, which – like other important institutions -  had been completely destroyed by the 2011 earthquake.
B. Advancement of Education
We have selected those projects in the category of the advancement of education which enhance international understanding by bringing together people from different countries and cultures.  Regularly, we host high-school aged students for  period of 12 months and support them financially as part of the rotarian exchange program.
During the past years, for example, we hosted students:
2012 from Chile
2011 from Mexiko
2010 from Ecuador
2009 from Venezuela
In addition we continuously support young people through our program activities in “Professional Development”
Homepage Contact